The process
During wet blasting the surface of a work piece is treated with a mixture of abrasives (e.g. ceramic balls - "Zirshot") combined with water using compressed air. This technique allows the treated work piece surface to be thoroughly cleaned. This technology is mainly used for maintenance work in the aerospace industry. For example, fan disks of aircraft engines are treated using this method.

The reason for the project
Existing machines constructed in 1986 and 1992 were equipped with a Schleicher Pronumerik CNC and Siemens Simatic S5 PLC with a Mitsubishi K-series PLC and counter-positioning respectively. Theses devices were already outdated or discontinued. Therefore the availability of spare parts was problematic. To ensure the operational reliability, the controls and drives would have to be replaced with state-of-the-art systems.

The equipment
The machines allow a continuous wet blasting with up to 9 nozzles and hand-blasting as well. The movements of the nozzles and the work piece are controlled with a 5-axis CNC. The blasting process is controlled in the PLC part of the control. The visualization of the process and the display of the CNC are installed on a common control panel.

Our project scope
Our main achievements in this project were

The development of this automation concept is based on Sinumerik 840D sl CNC with 5 axes and a Siemens industrial PC with Windows. The Sinamics servo drives are connected via DriveCliq bus system with the CNC. The system is consistent from the motors to the NC CPU. For users this means maximum performance with maximum diagnostic capabilities.

For the process part of the machines the integrated Simatic S7 PLC was used. The external peripherals are Siemens ET200 Profibus nodes. The visualization with nozzle-administration, recipes, statistics, logging and data storage has been created on a Siemens Win CC.

The project manager Mr. Urs Tobler / TBM Automation AG reported: "The challenge of this project was the small time frame that we had until the resumption of production. The machines were urgently needed for production. So we had to complete the rebuild and re-commission in 3 weeks - a real challenge! A pre-commissioning in our house was, therefore, essential. The project lead time from contract signing to final acceptance amounted to less than 5 months." 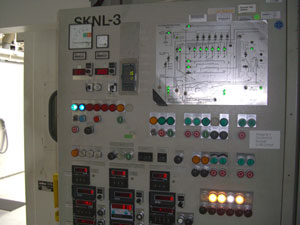 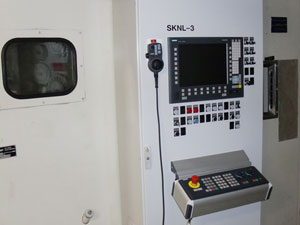 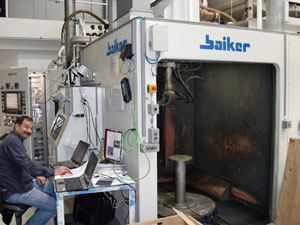 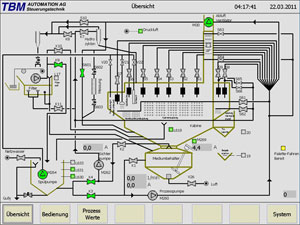